Its mute, blunt rejection of craft threw the arbitrariness of handiwork starkly into relief.

The work of New York sculptor Duncan Johnson at J.J. Brookings shows some of the difficulties of reinstating complexity of craft and form into wood sculpture after the minimalist finale.

Johnson communicates the physical pleasure of working with wood in hardwood pieces such as "Knuckle" (1996) and in softwood works such as "Halfmoon" (2001) and "Desert Storm" (2001).

Johnson continually runs the risk of spending himself in obsessive craft.

A few pieces have the mini-monumentality of dollhouses or architectural models. One or two even suggest small, timeworn worlds, little allegories of global burnout.

In several wall pieces, Johnson fastened mosaics of wood slivers to irregular wood armatures using hundreds of tiny pins. The resulting reliefs have the shimmer of a gap-ridden, abstract marquetry, though its energy is merely decorative.

"Halfmoon" (2001), which stands on edge, is a gently curved plane composed of hundreds of bits of wood, cleanly finished on one side, all uneven at the back. "Halfmoon" might have got its title from the smooth circular indentation in its front surface, which is cratered with the rings of dark end grain punctuating the mosaic of pale wood segments.

The excellence of this piece comes from the sense that Johnson continually observed his materials as closely as the form he was making. Wherever that balance has occurred -- in "Halfmoon," "Knuckle" (1996) "Web" (1996) -- Johnson makes something mysteriously as well as rationally satisfying. 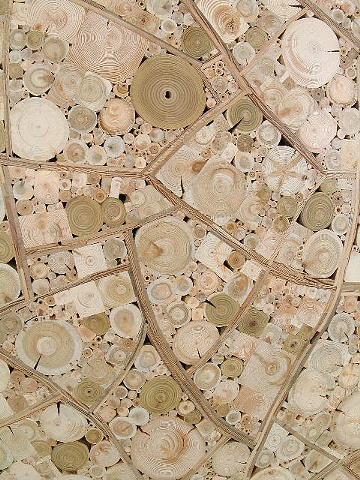